The Indians Who Didn’t Know They Were Extinct

NPR once did a segment that said a study had shown that 90% of United States history books had no mention whatsoever of American Indians.   Since the American Revolution, American Indians have served in the US military more than any other ethnic group on a per capita basis.  However, not only are Indians being written out of US history, frequently the problems plaguing the communities are overlooked as well.

Immediate need for over 200,000 homes in Indian Country.  A study released from HUD shows “that the housing needs in tribal areas remain the most severe in the nation and that the resources to address the problems have declined more rapidly than for other federal housing programs.”  https://www.huduser.gov/portal/publications/HNAIHousingNeeds.html

3 in 4 Navajo Indians living on the reservation have type-2 diabetes.  These same people live in an area the size of West Virginia and have access to 13 (THIRTEEN) grocery stores!

Highest suicide rates for youth are in Indian Country.  At the high school in the town that I worked at, Chinle, Navajo Nation, not a single high school student took the SAT or ACT.  That’s not a reflection on the students, it is a reflection on the environment they are in which constantly reminds them that they have no hope.  Hope can come from anywhere, and we are trying to build hope one home at a time.  Getting the youth involved to empower them to build something and see the fruits of their labor but to also see how they can help to produce change in the world.

More American Indian women are assaulted and killed than any other racial group in America proportionately.  Nearly half of all American Indian women have been raped, beaten, or stalked by an intimate partner.  American Indian women are murdered at a rate 10 times the national average on some reservations. Working in legal aid, I heard a story about a client who was forced to live 50 feet from her uncle who had repeatedly assaulted and raped her because there was no place else for her to move without leaving the community and moving far away from her family.  Due to the lack of housing options and shelters many women and children are forced to remain with their abusers because there is literally nowhere else to go unless they completely leave the community.  No one should be forced to stay in an abusive situation because there is no other housing option available. 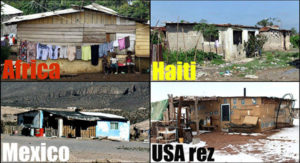 JackRabbit Homes is a Solution

A study released in January 2017 by Housing and Urban Development (HUD) confirmed that the housing situation in many Indian reservations is more severe than other areas. The first study of it’s kind was put out in 1996, and this was the 20 year follow up.  While things have improved there is still a long way to go.  The study which can be found here:  https://www.huduser.gov/portal/publications/HousingNeedsAmerIndians-ExecSumm.html shows that overcrowding and physical housing is still a dire problem affecting rural reservations.   Two things the study specifically sites as being reasons for this occurrence are:
1.Costly Infrastructure
2. Complex Legal and Financial Restraints on the Land

EcoSmart Homes are designed to live with all the modern day amenities and state of the art technology, just off-the-grid, meaning without the costly infrastructure.  Many people have to haul water to their locations right now and have no way to capture and store the water that falls from the sky. For a great article on housing issues and water issues and a wonderful woman doing something about it please see: http://www.hcn.org/issues/47.5the-woman-who-brings-drinking-water-to-remote-navajo-homes

There are complex legal issues going on. However, the reality is that people have land to build on and they have put in place everything from owner built homes to storage sheds to live in.  The financing that normally would be found in other communities is not there to build and sell homes because of the complex legal issues with the land and the Federal Government being the ultimate owner. So no one would really finance building a home on an allotment because legally attachments stay with the land, meaning once the house is attached to the land it becomes a part of it.  Where people could find financing is in the mobile home and shed industry, because those are generally not attached and can be repossessed.   However, JackRabbit Homes builds using a model of sweat and revolving equity and helps to connect homebuyers to programs in place to help with financing as well as financing the homes directly ourselves.
For articles on why housing is so bad in Indian Country please see the following:
http://rapidcityjournal.com/news/local/pine-ridge-breaks-ground-on-m-housing-project/article_ce5c47cb-2629-50d5-adcd-654b245884e8.html
Why It’s So Difficult to Build Homes on the Navajo Reservation by Dennis Wagner and Craig Harris of the Arizona Republic for AZCentral

We can change this starting right at home.  Would you buy a cup of coffee for a friend to help give them some hope?  Would you consider spending $5 (less than a unicorn frappucino at Starbucks) to make a difference in the world and in the life of someone else?  https://www.gofundme.com/